The Tamagotchi School (たまごっちスクール せーとぜーいんしゅーごっち！), also known as the TamaSuku (たまスク), is a spin-off Tamagotchi released only in Japan on November 23, 2006. This device was released on the tenth anniversary of Tamagotchi.

The Tamagotchi School is shaped like an egg, on its side with a screen in the middle surrounded by an egg shell border. The infrared sensor is at the top and each device comes with a decorative tag. The left side of the device has 4 direction buttons unique to the Tamagotchi School while the right side of the device has two buttons to select and cancel.

Two versions of the Tamagotchi School were released with the second version being released a year later. The versions have three characters and subjects exclusive to them.

On the Tamagotchi School, the user takes on the role of a teacher running a school. The goal is to keep the school's popularity up, enroll new students, and increase the score of the three main subjects which are raised by playing their respective games.

Everyday, a few students will visit the school and ask to join the class. The user must accept them by pressing the B button. There are class ranks on the TamaSuku, and the rank increases as the user gets more students and subject points. When the TamaSuku's class rank increases, the chalkboard in the background of the screen gets bigger. If the user does not play for a while and the popularity begins to fall to 0, students will start to leave and the rank may decrease. However, students may return to join the class again at a later time as long as the popularity meter is not at zero.

The check meter displays the user's general progress on the Tamagotchi School and other important information.

The student attendance icon displays a list of the user's students.

There are six games in total on the Tamagotchi School with two games for each subject. Playing the games earns the user gotchi points and raises the point total for the subject.

The Tamagotchi School can connect to a variety of devices and the e-Tamago website for exclusive characters and gotchi points.

There are four categories of items

The player can shop for more items from the regular and seasonal items category.

This is the attention icon of Tamagotchi School. It lights up when a student needs something from the user (either to talk or play a game) or when a new student is asking to join the school. 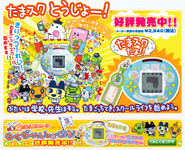 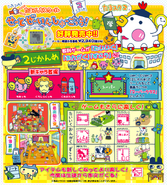 New games and characters of the second version

Explanation of user's role as a teacher 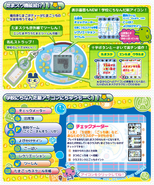 Explanation of buttons and icons 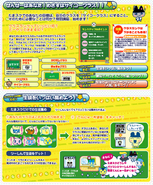 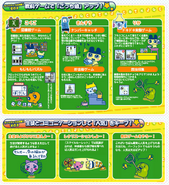 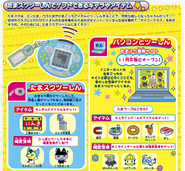 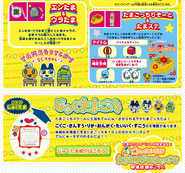