The Tamagotchi Smart (たまごっちスマート Tamagotchi Sumāto) is a virtual pet released in November 2021, celebrating the Tamagotchi franchise's 25th anniversary. Unlike previous Tamagotchi releases, it is in the style of a wearable smartwatch, akin to the Apple Watch and various other devices.

The Tamagotchi Smart is smaller than previous color-screen models, measuring 6.5 centimeters tall (approx. 2.5 inches), making it similar in size and weight to the Tamagotchi Connection and Tamagotchi Plus models.

The front is covered in clear plastic with the new Tamagotchi logo printed above the screen. Unlike any other Tamagotchi release before, the B button (now referred to as the "home button") on the front of the device is the only functional button; the A and C buttons are purely aesthetic and are smaller. Pressing the home button activates the device from sleep mode, and pressing it again brings up the main menu. Pressing it while in any menu will back out of the current selection.

The main screen area can detect touch and swipe gestures, functionally replacing the traditional buttons. There are four touch sensitive areas of the screen: upper left (A), upper right (B), lower left (C), and lower right (D). The user can swipe horizontally (A to B, C to D) or vertically (A to C, B to D). Because of this, the Tamagotchi Smart cannot detect diagonal swipes, and swiping too close to the center of the screen will elicit no response. From the main screen, swiping left will bring the Tamagotchi out to the terrace. Swiping right will bring up the clock. In the main menu, the user navigates the two pages of icons by swiping up and down.

The left and right sides of the device have plastic flaps that cover compartments. On the left side is the port to charge the device, and on the right side is a slot insert and download data from a Tama SmaCard. The device has sensors that allow it to detect sound, allowing the user to "talk" to the Tamagotchi, and has a built-in step counter.

Each unit is bundled with a matching watch strap that attaches to the Tamagotchi through indents on the top and bottom sides, as well as a cable to charge the battery. On a full charge, the device can operate for about 30 hours on average, assuming the user actively uses the screen for about an hour each day and with all the sensors functional. The battery takes about two hours to reach a full charge, and it is recommended to remove it from the charger as soon as the battery is full.

TamaSma Cards (たまスマカード) are a series of memory cards that are compatible with the Tamagotchi Smart, similar to the Tama Deco Pierces for the Tamagotchi P's. When inserted, the card will download content onto the device, including characters, meals, snacks, toys, accessories, wallpapers, clock faces, and games. All foods, items, accessories, and living room options that are downloaded will have icon next to their image in the menus. Eating the foods and using the items increases the likelihood of obtaining an adult character from the TamaSma Card. All items from the card are available for free in the shops.

Only one card's data can be loaded onto the Tamagotchi Smart at a time, and each card can only be linked with up to 3 Tamagotchi Smart devices. If the user obtains an adult exclusive to the card, the card's data cannot be removed until the next generation, or if the character runs away or dies. When changing the data to a new card or removing the data of a previous card, all card food and items are immediately removed from the inventory. If a card's living room or clock face are being used, they will be replaced with the default options.

Instead of moving around the screen like previous virtual pets, the Tamagotchi will always be positioned at the bottom right corner of the living room. Tapping the character will cause the character to come close to the screen, and bring up a menu of various options.

The petting option may also appear when the Tamagotchi goes to bed, asking the user to pet it to help it fall asleep.

This icon is the first icon on the first page, on the top left corner, represented by a heart and a gear wheel. The icon has four different options.

This icon is the second icon on the first page, on the top right corner, represented by a house with a + symbol. The icon has three different options.

This icon is the third icon on the first page, on the bottom left corner, represented by a fork and knife. There are default foods that are always available, and additional food can be purchased from the app. Meals increase the Hungry meter, and Snacks increase the Happy meter.

This icon is the fourth icon on the first page, on the bottom right corner, represented by a showerhead. Selecting this icon when the Tamagotchi has made a poo will summon a broom to clean the poo away. The user can also catch the Tamagotchi just before it does so and, using the icon, have them use a toilet instead of making a mess on the floor - doing so raises their Happy meter. The second option will make the Tamagotchi take a shower; the Tamagotchi will gradually become dirty over time (represented by dust particles around it), and it will not be allowed to leave the house until washed.

This icon is the first icon on the second page, on the top left corner, represented by a wardrobe. The icon has three different options:

This icon is the second icon on the second page, on the top left corner, represented by the word "App". This icon cannot be selected while the Tamagotchi is still a baby. There are four different options.

This icon is the third icon on the second page, on the bottom left corner, represented by an open door. This icon cannot be selected while the Tamagotchi is still a baby. There are two options.

This icon is the fourth icon on the second page, on the bottom right corner, indicated by a Tamagotchi device with radio waves. This icon has three options.

Death and Running Away

The Tamagotchi Smart has two ending sequences, both which occur based on different types of neglect.

In both sequences, once the Tamagotchi is gone, only the profile screen can be accessed by tapping anywhere on the screen, showing the Tamagotchi's final stats. Holding down the home button will make a new egg appear, and tapping the egg will begin the hatching process. All food, items, photo decorations, and Gotchi Points will carry over to the new egg.

Various accessories have been released to customize the Tamagotchi Smart. 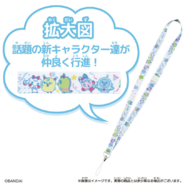 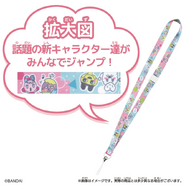 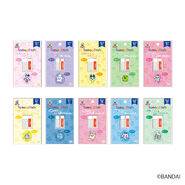 Teaser of date the Tamagotchi Smart would be announced

Second teaser image, "Talk to Me".

Third teaser image, "Stay with Me".

The white Smart next to the white P1.

Announcement of the NiziU white watch 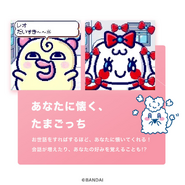 Developing your friendship with the tamagotchi 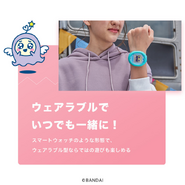 The Tamagotchi Smart being worn as a watch 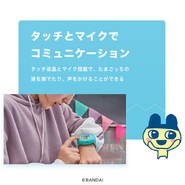 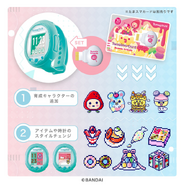 Tama SmaCard and its downloadable contents

Tamagotchi reacting based on friendship level

Meeting other tamagotchis through app in device 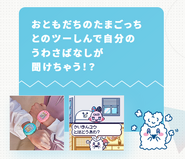 Connectivity with other users

Smaspitchi announcing deals in the store 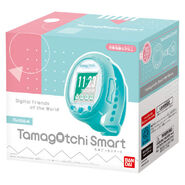 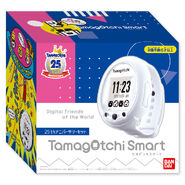 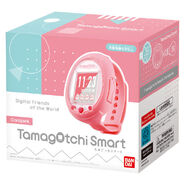 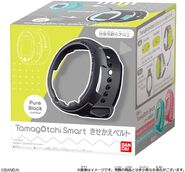