The Tamagotchi species comes in a variety of different subspecies. each with their own unique characteristics that distinguish them from the standard Tamagotchi. However, they retain several key characteristics of Tamagotchi, such as the capability of Evolution.

Angels (てんしっち Tenshitchi) are a subspecies that acts as part of the Tamagotchi afterlife. Angels are born when a Tamagotchi dies, and their spirit, Obaketchi, evolves into Ghost Jr. They live in the Tenshitchi Capital, often have wings and/or a halo, and spend their time praying for the health and safety of the living Tamagotchis. Leaving the Capital gradually consumes energy from them, preventing them from leaving for very long. They are sworn enemies with the Deviltchi, and often have to stop the Devils from causing chaos or tempting weaker Angels into turning evil.

Angels are raised on the Tamagotchi Angel, and can also be observed in Hoshi de Hakken!! Tamagotchi. Names in English end in "Angel", with the exception of Ghost Jr. In Japanese, names end with "tenshi" (てんし) or "ten" (てん). "Tenshi" is the Japanese word for "Angel".

Deviltchi (デビルっち Debirutchi) is a subspecies that acts as part of the Tamagotchi afterlife. Deviltchi are born when neglected Angels stray away from their angelic duties, or are tempted to perform evil by other Deviltchis. They only have four stages of life (three standard and one special), and can live for a lot longer than most subspecies. They reside in the Devil World. Deviltchis usually either have pointed horns or black wings, although sometimes they can have both or neither. For an entertainment fix, Deviltchis like to spend their time bullying and harassing young Angels.

Deviltchi can be raised on the Debirutch no Tamagotch. Names in English will either end with "Deviltchi" (such as Girl Deviltchi), or have Devil in front of their name (such as Devil Mametchi) if they are a Devil counterpart to a normal Tamagotchi. Names in Japanese will either end with debiru (デビル) or debirutchi (デビルっち), or have debiru within the name. "Debiru" is the Japanese word for "devil".

Mushitchi (むしっち) is a subspecies that is comprised of bug-like Tamagotchi. They live primarily in the Mushitchi Forest (though can be found all over the planet) and are nearly invisible to the naked eye, which makes them vulnerable to being accidentally stepped on. Despite their small size and bug-like features, they are as sentient as a regular Tamagotchi.

Mushitchis are raised on the Mori de Hakken! Tamagotch and Game de Hakken!! Tamagotchi 2. The name comes from the Japanese word mushi (虫), which means insect.

Sakanatchi (さかなっち) is a subspecies that is comprised of fish-like Tamagotchi. They are born and raised in the Sakanatchi Sea, and can be found all over the planet. They are vulnerable to attacks from polar bears. Like the Mushitchi, they are as sentient as a normal Tamagotchi.

The standard Tamagotchi naming conventions apply to Akai Tamagotchi. If they are an Akai variant of a normally non-Akai Tamagotchi, they may sometimes be referred to with "Akai" before their name, although they are not counted as a separate species due to how Akai Tamagotchi are formed.

The standard Tamagotchi naming conventions apply to Ura Tamagotchis; however, if they are a counterpart of a normal Tamagotchi, they will have "Ura" (ウラ) in front of their name.

Costume characters are a species of Tamagotchi that only exist when another adult character uses a costume item. Once an adult wears the costume, their personality will change to match the new form. However, their favorite foods and sleeping times will remain unchanged. Costume characters have no special naming conventions.

On the Keitai Kaitsuu Tamagotchi Plus and Akai, the costume item was exclusive to Kurokotchi (turning it into Wooltchi), and would remain on until the item was used again. Costumes on the Tamagotchi Connection Version 2, Version 3, and Tamagotchi Music Star can be worn by any adult, but the adult will remove the costume once they go to sleep. Additionally, some costumes are one-time use items and must be bought again after being used, while others can be used perpetually.

A My Tama (ナウたま Nautama) is a special kind of Tamagotchi born from m!xing. When two adult Tamagotchi characters marry, the offspring will inherit a mix four of the parents' physical traits: the body (head, torso, and mouth), eyes, headgear (such as hair, ears, or hats), and miscellaneous accessories (such as wings, capes, tails, etc.). It can also inherit body and outline colors, including those of Akai and Ura Tamagotchis. The genetics inherited influence the My Tama's favorite foods and items, as well as what time it falls asleep.

My Tamas follow the standard naming convention of having "-tchi" (っち) at the end of their name. However, the user is required to provide the name. My Tamas were introduced on the Tamagotchi m!x in Japan and on the Tamagotchi On internationally.

Gaiatchi (ガイアっち) refers to all living Tamagotchi that are part of the natural ecosystem. They have been visible since Tamagotchi was introduced, but the name for this subspecies wasn't mentioned until Tamagotchi 'Round The World. This term can refer to things like plants, trees, and clouds, but can also refer to planets and celestial bodies, such as Sunnytchi, Blackholetchi, or even the Tamagotchi Planet itself.

Gaiatchi have not been able to be raised on any virtual pet. However, they can be cared for in Tamagotchi 'Round The World.

Hanerutchi (はねるっち) characters are characters based on characters and skits from the Japanese TV show "Haneru No Tobira". They reside in Hanerutchi Town. Hanerutchi characters resemble humans, although they still have "-tchi" on the end of their names and are capable of Evolution, whereas other human characters are not. They resemble cartoon-like humans in artwork or when performing a Close Up, but otherwise resemble heads with legs as sprites, similar to Oyajitchi.

Hanerutchi characters are generally separated from standard Tamagotchis, they do not come into contact with each other although they have a similar lifestyle, except that their place of residence replaces all words and names of areas involving "Tamagotchi" with "Hanerutchi".

The Tamagotchi comrades (たまごっちのなかま Tamagotchi no nakama) are small, vague creatures utilized to represent the Tamagotchi species without portraying specific characters. Their bodies are simple shapes such as circles or squares, and they often possess common Tamagotchi character design traits such as prominent lips or stick-like legs. They do not have individual names.

They were mostly used during the 1990s wave of Tamagotchi, in which they could be seen on the packaging for the virtual pet devices and GameBoy games. Although less common, they were still used after Tamagotchi's resurgence, and can be seen on several Connection-era shell designs.

In their introduction, the characters featured on the Tamagotchi Osutchi and Mesutchi were written to be a separate species of Tamagotchi, born on Earth when couples began sharing their Tamagotchi pets between each other. The Osutchi (オスっち) and Mesutchi (メスっち) species were nearly identical to a normal Tamagotchi, except they had genders, which the species previously lacked. Osutchi and Mesutchi are identical during the baby and child stages, but show gendered traits as teenagers, adults, and seniors. They share the same naming conventions as the normal Tamagotchi species, although the Mesutchi characters often have "ko" in their names.

Following the brand reboot in 2004, gender is fully integrated into Tamagotchi species, and the Osutchi and Mesutchi characters are no longer treated as a subspecies.

The characters originally featured on the Yasashii Tamagotch are recorded to be a subspecies in the second Tamagotchi Research Report: Tamagotchi Book. They began being born when Professor Banzo developed a larger, more comfortable Tamagotchi device for the characters to live in, which would also allow users to provide care easier. Due to being a species originally born on Earth, their mannerisms are different from the native Tamagotchi species, and act and behave more human. Although they get along with the other types of Tamagotchi, they have a hard time adjusting to life on the Tamagotchi Planet. As of the 2004 reboot, they appear to no longer be treated as a subspecies.

These Tamagotchis are only seen in the Tamagotchi Research Report Book, and are believed to be the ancestors of all Tamagotchis. According to the book, a large amount of these Tamagotchis, especially the extincted ones, are black in color. These Tamagotchis either evolved into modern species, or became extinct (such as the fifth one shown, resembling a cloud with three red dots and a tail).

These species are a reference to the early Tamagotchi concept artwork used in the Tamagotchi's early development, before the original Tamagotchi's concept and characters were finalized.

Iyatchi (いやっち) is a subspecies of Tamagotchi that have a more violent and ruthless disposition than a normal Tamagotchi. Iyatchis have not appeared on any virtual pets, although they appear on the packaging for nearly every vintage Japanese release, hidden behind the Tamagotchi unit. They are described in more detail in the Tamagotchi Research Report Book, and have not been seen or mentioned since.

According to Professor Banzo, they are characters that exist in comics that Tamagotchis read, originating from a hostile world known as the "Iyatchi Planet" (いやっち星). However, they are also seen hidden throughout Tamagotchi Town within the Research Report, suggesting they may be real. They resemble normal Tamagotchi characters, except they have exaggerated details, sharp teeth, and crazed expressions. They are often seen carrying dangerous objects, such as knives, axes, and chainsaws, which frighten other Tamagotchis.

Their name comes from the Japanese word "iya" (嫌), meaning unpleasant or detestable. Their designs bear a striking resemblance to early Digimon artwork. 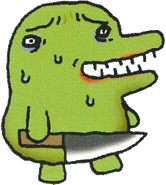 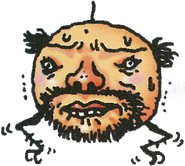 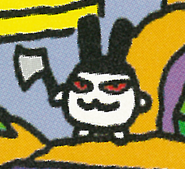 Zuccitchi
Add a photo to this gallery
Retrieved from "https://tamagotchi.fandom.com/wiki/Tamagotchi_Subspecies?oldid=100098"
Community content is available under CC-BY-SA unless otherwise noted.