This article is about the 1999 SNES game. You may be looking for the location.

Tamagotchi Town (たまごっちタウン) is a strategy game, developed by Marigul and published by Bandai in May 1999 as one of the last Tamagotchi media released during the vintage era. It was one of the games that could be downloaded onto a Nintendo Power cartridge released for the Super Nintendo only in Japan. The goal of the game is to create a large Tamagotchi society on a given piece of land containing four different landscapes.

Evolution in the game is based on a Tamagotchi's stress, a factor that depends on its quality of life and the pollution of its environment, and unlike on the original toys both teen characters can become any of the adults in their group with only two exceptions. If a Tamagotchi's stress passes 30, they will run away. A Tamagotchi's age counter resets upon each evolution, counting only the period of time they have lived in that form rather than their overall life, and they will pass away after having been an adult for around 10 to 20 days.

If food is placed in a block and there is not enough in the adjacent block at daybreak to feed the residing Tamagotchi, they may migrate in order to eat. When teenagers who will soon evolve are lured to blocks that belong to a different type than their native one, they will evolve into something other than usual. For example, a Tamatchi lured into a mountain block will evolve into Risutchi.

Stress can be increased through living in a polluted block, not being fed, being lured to another block by food or performing a clean that does not match the environment, and can be decreased by placing a soccer ball in a block. Soccer balls decrease about 14 stress at a time and must be replaced after a clean or at the start of a new day.

A block can become polluted if poop or leftover pieces of food are left uncleaned at the stroke of midnight. There are three types of cleans - wind (for grassland), rain (for mountains and forests) and waves (for oceans), and all types of blocks that can be affected by a certain type will be cleaned whenever it is used, regardless of whether the player is viewing all blocks or taking a closer look at a single one. Cleaning at certain points of the day may pressure a Tamagotchi to evolve or die up to a dozen hours earlier than usual. Half of a block's pollution level is added to the stress level of every residing Tamagotchi at the start of a new day, and pollution may cause HagureObaketchi or WatariDoritchi to appear when combined with other factors. 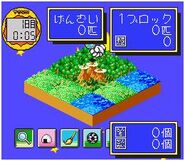 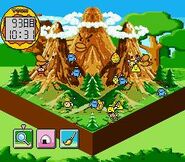 The Left-Right game, showing the six character groups.
Add a photo to this gallery
Retrieved from "https://tamagotchi.fandom.com/wiki/Tamagotchi_Town_(SNES_Game)?oldid=101297"
Community content is available under CC-BY-SA unless otherwise noted.