Tamagotchi Video Adventures is a VHS released in the US on November 24th, 1998. It is a 7th Level production presented by Bandai Entertainment, Inc. and has a running time of 45 minutes.

Cosmotchi, who runs the Tamagotchi Museum, notices that while the museum has plenty of exhibits from various other planets, it has yet to receive an exhibit from the planet Earth. He decides to send a party of various Tamagotchis to Earth to find a new addition to the museum's collection.

When the Tamagotchi land on Earth in a UFO, they split into parties of two, but one Masktchi is left without any partner. The wandering Tamagotchis soon collect various things from the planet, such as a flower, television, a Walkman, a set of golf clubs, a photocopier, an ear of corn, and a Cadillac. Each time they take something, they leave behind a golden egg. Masktchi eventually finds a gumball machine and takes it, leaving behind his egg. However, the gumball machine falls and smashes on the road. Masktchi is miserable until a little girl shows up to give him a Popsicle to cheer him up. Masktchi is delighted, but upset he has nothing to give back to her, but she doesn't mind.

By the time Masktchi returns to the ship, most of the Popsicle has melted, and the rest of the Tamagotchis tease him. By the time they return to Tamagotchi Planet, it has been completely reduced to the bare stick. Cosmotchi is impressed with all of the souvenirs they had brought, but insists that everything taken from the planet must be carefully examined before choosing one for display. When he examines Masktchi's Popsicle stick, he proudly exclaims Masktchi's stick to be the winner; it showed the kindness and selflessness of the people on Earth. Masktchi is given a medal and puts the stick onto its display, and even the Gotchi King appears to show his gratitude.

Following the animated short is a music video dedicated to many Tamagotchi characters that were featured in the story.

How to Draw Tamagotchi

"Dan and Handy Warhol" host a special at the end of the VHS showing the viewer how to draw almost every Tamagotchi, as well as mobiles and picture frames. 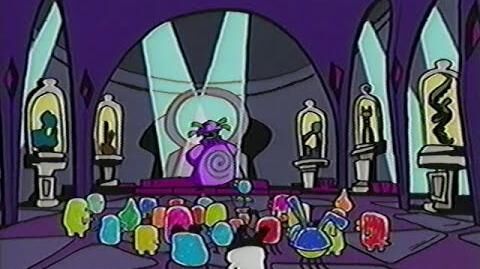 Vulcan exhibit
Add a photo to this gallery

Retrieved from "https://tamagotchi.fandom.com/wiki/Tamagotchi_Video_Adventures?oldid=100409"
Community content is available under CC-BY-SA unless otherwise noted.