Tamagotchi iD (たまごっち アイディー Tamagotchi Aidī) or nicknamed "ID" is a version of the Tamagotchi color series, released in Japan in 2009. It has a clear plastic jewel-like face around the screen. While the original color-screened Tamagotchi model has a flat back, this version has a rounder back.

The Tamagotchi iD was the first Tamagotchi to have downloadable items, accessories, wallpapers, and games via infra-red from its own download site, tama-id.com, and later a designated home station. There were also new destinations, guest characters, and features such as the ability to wear accessories.

The aim is to raise and collect all the adult characters by having them become the player's Tama-Friends (たまとも Tamatomo), a key concept that was later adapted in the Tamagotchi iD L onwards, up until the Tamagotchi m!x.

To add a Tama-Friend to the list, the player needs to collect an adult-stage character's TamaTomo stamps by giving them their favorite food, accessories, or items. The final stamp is always earned by keeping the adult for 72 hours.

The Tamagotchi can be fed a meal or a snack. For meals, the player can choose to feed the Tamagotchi from their refrigerator or to go the convenience store or restaurant. The default meal in the refrigerator is rice, to which adult-stage characters express displeasure if they are fed it.

For snacks, the player can choose to feed the Tamagotchi from their cupboard or go to Tama Donuts or Tama Cafe. The default snack in the cupboard is a mandarin. At Tama Donuts, there is a loyalty program where the Tamagotchi will get to eat a special large donut after eating a donut there three days in a row.

If there is poop on the screen, selecting this icon would clean it up. If not, the player can choose to take their Tamagotchi to the toilet (such as when they're doing the "potty dance") or give them a bath.

The door icon is for visiting a variety of other locations around Tamagotchi Town.

Game Center: There a mini-games here that can be played to earn Gotchi Points. There are two built-in minigames, and two others that are downloadable.

Gotchi Reform: Various rooms of the Tamagotchi's house can be reformed: The living room, kitchen, toilet room, bathing room, and bedroom. There are four built-in themes for each, which are the default theme, a Lovelitchi theme, a sweets theme, and a royal gold theme.

Tama Depa: The player can use their Gotchi Points to buy toys and items for their Tamagotchi to play with.

Photo Studio: This is Lovepapalitchi's photo studio, where the player can choose an outfit and a background to take a photo of their adult-stage Tamagotchi character. It costs 450 Gotchi Points to get a photo taken.

Accessory store: The player can use their Gotchi Points to buy hats and accessories for their Tamagotchi to wear.

Match-Making party: The player can choose a partner for their Tamagotchi character so as to get a new egg and move on to a new generation. It can be accessed after having an adult for at least 48 hours.

Tama-Friend Plaza: This is where the player can visit previous Tamagotchi characters they've added to their TamaTomo list.

Represented by a heart, this is where the player can connect their Tamagotchi iD to another device using infra-red, or enter a password to get an item. The options are Tamagotchi iD, Plus Color, Hexagontchi, Download, Passcode, and Special.

Represented by a hat, this is wear accessories are stored. Only adult-stage characters can wear them.

This is where the Tamagotchi can interact with their items. The three categories of items are Daily Necessities, Playthings, and Special.

This is where the player can check their friends (other Tamagotchis they have connected to) and their friendship level, or view the pictures they got from the Photo Studio. If the Tamagotchi iD has connected to a home iD station, it will show a sprite of the atelier house and its gender will be listed as "girl".

The clover serves as the medicine function from older versions. It is used to heal the Tamagotchi when it is sick or miserable.

The 10th icon only lights up when the Tamagotchi needs attention, such as when its stomach or happiness meters are empty. Otherwise, pressing B while none of the icons are lit up brings the Tamagotchi to the garden, where they can sometimes receive mail, and then to the clock screen.

This is a slots game where the player gets three tries at matching three pictures of the same Tamagotchi character. The first round only has Mametchi, Chamametchi, and Kikitchi, whereas the last two rounds add Spacytchi. Matching 2 pictures of a character still adds to the final score, but matching 2 or 3 pictures of Spacytchi does not add to the score. Matching Mametchi is worth the most points and matching Chamametchi is worth the least points, with Kikitchi in between.

In this game, there will be a desired fashion item shown in the corner and four items will drop at different speeds from the top of the screen. The player needs to catch the right item. Sometimes there will be two units of the desired item and the player has to catch both, starting with the one that is falling to the floor faster. If the player misses an item or catches the wrong one, the game ends. The game is won after catching the correct items 20 times.

Players help Happyburgertchi make a burger on time. This game is downloadable.

The player is driving on a rainbow road. They can successfully reach the end by avoiding the obstacles by moving up and down. This game, along with Build a Burger, is downloadable.

The Tamagotchi ID SPOT was a special black and silver version of the Tamagotchi ID, only available in toy stores across Japan. It was a connection device, similar to a Tamagotchi Station. When connected to the owner's Tamagotchi, they would receive limited edition download items. Being counted as an official Tamagotchi while not being purchasable, it is one of the rarest Tamagotchis in existence.

Tamagotchi iD Lovely Melody version (たまごっち アイディー ラブリーメロディーバージョン Tamagotchi aidī raburī merodī bājon) is the music-themed version of the Tamagotchi iD, created to tie in with Melodytchi's introduction in the anime. There aren't many major changes from the gameplay of the original iD. One of the new changes is that Lovelin (replacing Lovelitchi) and Melodytchi (who replaces Uwasatchi) can now be raised. There are also 2 new games; "Violin" and "Lovelin Cooking", and new items, accessories, and wallpapers. There are 2 designs; Melody Crown, a purple and black shell inspired by Melodytchi; and Lovely Music, a white and pink shell inspired by Lovelin.

Tamagotchi iD Conan ver. (たまごっち iD コナン バージョン) is a rare, limited edition Tamagotchi iD that was given away with every subscriber issue of the Shōnen Sunday Manga Magazine, issue 3000. They have a dark blue shell and red gem. Units have been sold online for hundreds of dollars.

This version has characters from the Detective Conan series which players can talk to in a new destination, and Conan versions of the ID games that could be downloaded from tama-id.com. Not much is known about this Tamagotchi. Because only a limited amount of them were ever made, and it is very hard to find, this version can be considered as one of the rarest Tamagotchis along with the Tamagotchi SPOT series.

Six iD colors in their boxes 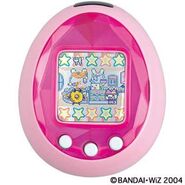 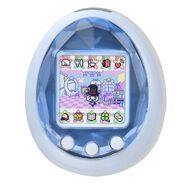 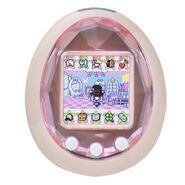