Gotchi King, ruler of Tamagotchi Planet, has become so angry over the lack of rainbow in the sky that he cracked his shell. Princess Tamako tasks Mametchi, Memetchi, and Kuchipatchi to find the legendary "Rainbow Shards" to restore the rainbow in the sky before Gotchi King becomes too upset. The trio then travel around Tamagotchi Planet on their quest to find the shards while helping the Tamagotchis they meet along the way.

Players can choose between Mametchi, Memetchi, and Kuchipatchi but will play as all three characters (the chosen character leading the group and the starting area being the character's hometown). This game consists of traveling to seven different locations on Tamagotchi Planet: Tamagotchi Town, Mame City, Guruguru Town, Patchi Forest, Flower Hills, Gozaru Village, and Berry Town. Players can also enter various houses and buildings, interact with other Tamagotchi characters, and play mini-games using the touch screen and microphone. To advance in the story, the player must explore the locations and talk to Tamagotchis to find out where the rainbow shard is hidden. Some Tamagotchis will ask for their help which will require clearing a minigame to proceed.

Note: The following characters are listed in this order in the game's "Friend Book"

These are characters that are not listed in the "Friend Book", but appear in the game regardless. 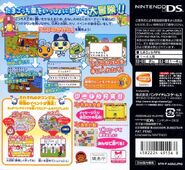 Talking to Beartchi in his cave