In this game, the player is either Mametchi or Lovelitchi working at TAMAX-TV trying to become a super idol. The player will need to collect parts of a costume obtained from shops in Tama Street using money earned by staring in television programs to unlock more games and up their rank as an idol. You can also talk to passing tamagotchi characters and see what they think of you as an idol. Every time you star in a television program or go shopping for new costumes in Tama Street, your energy bar will decrease and you may need to refill the bar by buying food in Tama Street. If the player runs out of energy they will become exhausted and pass out waking up in their dressing room but will lose stars in popularity.

Passwords to unlock extra costumes and foods in Tama street. 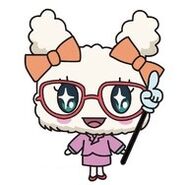 Lovelitchi as a weather girl 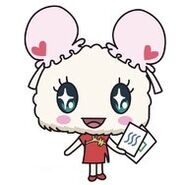 Lovelitchi as a Chinese waitress 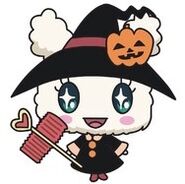 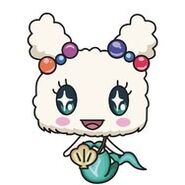 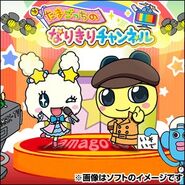 Add a photo to this gallery
Retrieved from "https://tamagotchi.fandom.com/wiki/Tamagotchi_no_Narikiri_Channel?oldid=104676"
Community content is available under CC-BY-SA unless otherwise noted.