Tamagotchi no Pichi Pichi Omisetchi (たまごっちのピチピチおみせっち) is a Japanese-exclusive Tamagotchi game for the Nintendo DS. It was released in June 2010. It is the fifth game in the Tamagotchi Connection: Corner Shop game series and the first to have 3D style gameplay and graphics.

Mametchi, Memetchi, Kuchipatchi, and Lovelitchi go to Pichi Pichi Island after they had won a trip in the lottery and decide to stay in order to help the locals with their businesses.

Choosing from one of the four main characters from the Tamagotchi! anime, players can start after the introduction. There are many other characters to talk to, some of them exclusive to this game. Players can visit various shops and talk with the owner of the shop if they want to help out. The shops will upgrade and become more difficult after several customers. More shops and games, as well as new locations on Pichi Pichi Island, are unlocked as the player progresses. 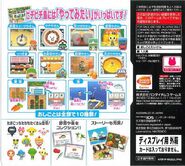