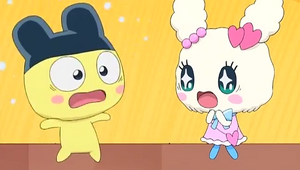 Tamagottsun ♥ Big Meeting!? (たまごっつん♥で大集合！？ Tamagottsun ☆ de dai shūgō!?) is part one of the debut episode of the fourth Tamagotchi! anime series, GO-GO Tamagotchi!. Along with part two, it is episode 222 overall. It first aired on April 3, 2014.

The mysterious phenomenon "Tamagottsun", which is said to happen on Tamagotchi Planet once every 1,000 years, occurs. Tamagotchi Town and Dream Town are now combined to create DoriTama Town along with the introduction of new and old tamagotchi characters. - the expansion of excitement!

Retrieved from "https://tamagotchi.fandom.com/wiki/Tamagottsun_♥_Big_Meeting!%3F?oldid=89368"
Community content is available under CC-BY-SA unless otherwise noted.