Tamatchi (たまっち Tamatchi) is a Tamagotchi character that debuted on the original Tamagotchi. It was introduced as a gender-neutral teen, but has been portrayed as a child in the modern era, with its gender varying.

Tamatchi resembles a round ball with a face, stubby arms and legs. In its original Japanese artwork, it was pink. In its US artwork, it is yellow, and its arms are thin and stick-like. In the Tamagotchi L.i.f.e. app, there is data for light pink and blue variations, though they cannot be obtained.

Tamatchi is cheerful and usually in good spirits, but is also talkative and wants to know anything. It is often described as "a little frisky", "nosy", and "quite the chatterbox". It is a well cared for adolescent Tamagotchi. It is well behaved and generally doesn't get into too much trouble. Tamatchi is also said to be active.

Tamatchi is a child character who appears either from evolving from a newly-hatched Teletchi or from marrying any two tier-three or lower adults. Teen evolutions are based on care and generation.

Tamatchi is a female child character who evolves from Shiropetitchi with less than perfect care. She may evolve into Chamametchi (perfect care), Ichigotchi (average care), or Ringotchi (bad care).

Tamatchi is a male child who can only evolve from Omututchi, who has a 50% chance of doing so. He can evolve into either Young Oyajitchi with two or more care mistakes, or Sunnytchi with less than two.

Tamatchi evolves from Marutchi if it has three or less stress. Akin to the original virtual pet, the adult Tamatchi evolves into depends on its quality of life, with higher stress levels resulting in unhealthier adults. Unlike the virtual pets, Tamatchi is capable of evolving straight to Oyajitchi or Bill - Oyajitchi with 10 to 13 stress and Bill with 14 or more stress.

Tamatchi was added to the game in Version 3.9, which was released June 12, 2019, making it its first 3D appearance. It is obtained from any of the baby stage characters when fed mostly snacks. 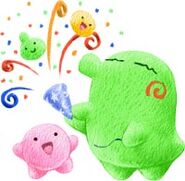 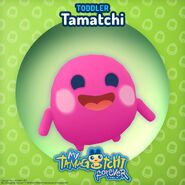 Announcement graphic for My Tamagotchi Forever.

Tamatchi's goodbye letter in Tamagotchi CD-Rom for Windows 95.
Add a photo to this gallery
Retrieved from "https://tamagotchi.fandom.com/wiki/Tamatchi?oldid=97516"
Community content is available under CC-BY-SA unless otherwise noted.