Both genders:
Male:
Tarakotchi (たらこっち) is an adult character who debuted on the original Tamagotchi.

In Japanese, tarako is a type of fish caviar, but can be used as an insult that means "Fish lips".

Tarakotchi has giant lips and thin legs but no arms, a small tuft of hair rendered as a mohawk in some artworks, pink cheeks, and a fat, bean-shaped body - in the original Japanese artwork, he had visible toes. In his original US artwork, his hair is missing, his body is pink instead of flesh tone, and his beak is violet instead of pink. On the Tamagotchi L.i.f.e. app, it has pink and green variations. He also slightly resembles a duck or a chicken.

Tarakotchi is naughty and selfish. He also has short patience and chatters a lot. He is a hasty type, so he is always in a state of confusion. He loves to roll and tumble, and is an avid skateboarder. An unfortunate flaw is his stinky feet, but his charming smile is the secret to his popularity. His favorite food is Teriyaki Chicken.

Tarakotchi can evolve from either Tamatchi or Kuchitamatchi with severe neglect. Tarakotchi is the worst character possible, and has the shortest lifespan, often dying 2-3 days after evolving. Tarakotchi sleeps at 10 PM, wakes at 10 AM, and has a base weight of 30.

Tarakotchi can appear in any generation (the only regular adult that can do so) and evolves from the four teenagers with three* or more mental care mistakes and less than three* physical ones.

*if evolving from either Ichigotchi or Young Mimitchi; two otherwise.

Tarakotchi's two items earned from connecting are the Skateboard and Boots, and its unique meal and snack is a chunk of meat on a bone and a donut - both of which it eats in single bites. Tarakotchi sleeps from 10 PM to 9 AM.

Tarakotchi appears in odd generations with average care. It sleeps from 10pm to 8am, has a base weight of 30lb and its favorite food is shrimp on the V2 and fish on the V3, while it dislikes sandwiches on both.

Tarakotchi is a male Kuchi Group adult, and will evolve from Young Kuchipatchi or Oniontchi if they have a majority of Arts points. On the V4, in addition to this, they need to have been given above-average care and have a total of at least 60 skill points.

As with all adults on the Entama, Tarakotchi will graduate from school 24 to 48 hours after evolution and sleeps from 10pm to 9am. It also sleeps from these times on the V4 and retains its food preferences from the two previous versions.

Tarakotchi is a male bad care character who appears on odd-numbered generations.

Tarakotchi is a male bad care adult who can evolve from any teen.

Tarakotchi is a NPC that can be encountered at the park.

Tarakotchi is a NPC exclusive to the 1996 Touch Card. He can be encountered in 1996 Tamagotchi Town.

Tarakotchi appears as an NPC on both the 20th Anniversary and Gift versions, and is met at Professor Banzo's laboratory if the user's Tamagotchi uses the Time Machine.

A female Tarakotchi is part of the group of Tamagotchi sent to find an Earth artifact for the Tamagotchi Museum. She is partnered with Zatchi, and the two manage to bring back a copy machine. Previously, the two had visited Mars and taken a NASA rover for the museum.

Tarakotchi appears as a background character. They are seen attending Tamagotchi School and visiting Celebria.

As with the P1, Tarakotchi is tied with Takotchi for being the unhealthiest adult in the game, evolving from Tamatchi with 40 or more stress and at least four selfishness, and from the other three teens with at least three selfishness (in addition to Tongaritchi also requiring the aforementioned stress level) - in all cases, its body must be higher than its IQ. It sleeps from 10pm to 10am, likes meat and hates carrots. Tarakotchi is tied with Hashitamatchi and Kusatchi for having the second-lowest possible top score in beauty contests at 70 points.

Found in the Manga! Tamagotch

In Found in the Manga! Tamagotch, there is a female Tarakotchi who is in love with Kuchipatchi. Kuchipatchi was infatuated with her when she was a Tamatchi, but after she evolves, Kuchipatchi is repulsed by her. She evolved as soon as they were about to kiss, which lead to Kuchipatchi kissing a Tarakotchi instead of Tamatchi and being disgusted.

In Acchi Kocchi Tamagotchi Town, Tarakotchi is one of a group of three Tamagotchis (along with Young Oyajitchi and Hanatchi) who admire Violetchi. He has exceptionally shiny, reflective lips that sometimes get mistaken for other objects as jokes.

Tarakotchi Angel is an angel form of Tarakotchi that appear on the Tamagotchi Angel. They aren't fond of baths, but smell vaguely of vanilla, so the other Angels don't mind. 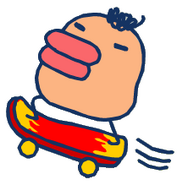 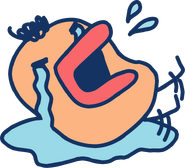 Tarakotchi as a soccer player

Found in the manga! Tamagotch artwork 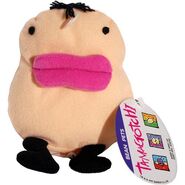 A Tarakotchi plush
Community content is available under CC-BY-SA unless otherwise noted.
Advertisement