Team MoriPakuCoffret (もりぱくコフレ団 Moripakukofure Dan), sometimes shortened to MPC, is a trio of characters that formed in GO-GO Tamagotchi!. The group is comprised of three girls: Moriritchi, Candy Pakupaku, and Coffretchi, while the leader is unknown (but is presumably to be either one of them).

The team was first formed in episode 5 of GO-GO Tamagotchi!, Formation! Team MoriPakuCoffret. The group dedicates themselves to fighting for justice in acts of good deeds and chivalry. Since then, the girls patrol their hometown looking out for trouble as well as having many fun adventures together.

They temporarily disbanded in episode 44 due to a fight between Coffretchi and Moriritchi.

Moriritchi, Candy Pakupaku, and Coffretchi spend time together and decide to form a group once they realize how well they get along.

The team become tiny after eating one of Candy Pakupaku's candies which happened to have a mysterious power.

The trio have 2 short songs--a rock-style theme song, and a marching tune. The first has been sung in the anime multiple times, whereas the latter was only sung in their debut episode. Both songs were available as tracks on the last Tamagotchi music CD.

Team MoriPakuCoffret in the anime

A flag with an image of Team MoriPakuCoffret

Each member with their own signature item (Tamamori, candy, and makeup) 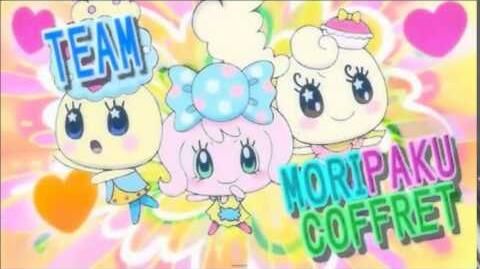 Retrieved from "https://tamagotchi.fandom.com/wiki/Team_MoriPakuCoffret?oldid=97244"
Community content is available under CC-BY-SA unless otherwise noted.