Teitokutchi (ていとくっち Teitokutchi) is a male parent character who debuted on the Tamagotchi Connection Version 5 Celebrity.

Teitokutchi has resembles an admiral. He has white skin, blue eyes, black eyebrows, and curly gray hair. He wears a dark gray three-cornered hat with a yellow stripe and a white flower. He also wears light yellow pants and a light yellow shirt over a light blue shirt, and a white cravat.

A gentlemanly Tamagotchi with a slick hairstyle. Every night, it sleeps with over 100 curlers in its hair to maintain its curls. It struggles to avoid turning over in its sleep and ruining its hair care.

Teitoku is Japanese for "admiral" or "commodore".

An octopus comes out from under Teitokutchi's hat 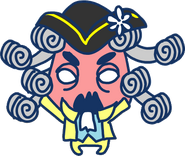 Add a photo to this gallery
Retrieved from "https://tamagotchi.fandom.com/wiki/Teitokutchi?oldid=91733"
Community content is available under CC-BY-SA unless otherwise noted.