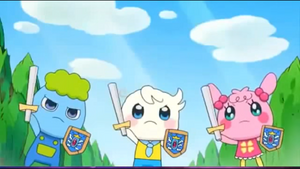 The Brave Three and the Devil King's Castle (三人の勇者と魔王の城 San'nin no yūsha to maō no shiro) is part 2 of episode 42 of GO-GO Tamagotchi!. Along with part one, it is episode 263 overall. It initially aired on January 29, 2015.

While reading a story, Lovesoratchi and friends become inspired and act out the story, which leads them to DoriTama School.

Retrieved from "https://tamagotchi.fandom.com/wiki/The_Brave_Three_and_the_Devil_King%27s_Castle?oldid=99202"
Community content is available under CC-BY-SA unless otherwise noted.