The Earth (Ji āsu ジ・アース), also known as The Blue Planet, is a planet in the Milky Way Galaxy, home to the human race.

The Earth is a blue planet not far from Tamagotchi Planet's galaxy. Its overall geography consists of a large oceanic regions, similar to Tamagotchi Planet's oceanic geography. The lands are green and the landscapes are sculpted with majestic mountains, deserts, forests, and plains. While images of Earth were closer to its real-life depiction in the 1996-1999 media, as of its 2004 incarnation, it has a face, two stubby arms, a large tower with a heart-shaped antenna, and the words "・the earth・" are visible on its side.

Five years after the Tamagotchis left Earth, they returned to show the humans their appreciation for taking care of them in their time of need. Tamagotchis have visited Earth on many occasions since, with the two races enjoying co-existence. But after many years, this mutual bond began to fade, with fewer Tamagotchis being able to travel between the two planets. However, the bond between Humans and Tamagotchis remained strong. A collection of small islands, called the Tama & Earth EXPO, was established to teach the Tamagotchis things about the Earth, including its cultures, cities and continents.

In 2007, Mametchi's "Forwarding Machine" was accidentally pointed at the Earth, causing a young girl, Tanpopo, to be transported to the Tamagotchi Planet. A rocket capable of intergalactic flight was build to bring her home, but after the rocket is used to save the Tamagotchi Planet from illness and runs out of fuel, Cometchi brings her home instead.

In 2014, The Earth and the Tamagotchi Planet became perfectly aligned for the first time in one thousand years. This triggered an event on the Tamagotchi Planet, Tamagottsun, that merged two of the Planet's biggest continents into one, along with its two major cities. That same winter, a letter to Santa Claus from two young girls, Yukine and Suzune, mysteriously appears at Christmas Island. Upon finding the letter, Santayellowtchi and his Yellownosetchi leave to visit the Earth to fulfill her Christmas wish. Upon discovering him missing, Mametchi, Memetchi, Kuchipatchi, Lovelitchi, Lovesoratchi and Rednosetchi take Santaclautchi's sleigh and travel to the Earth to find Santayellowtchi. 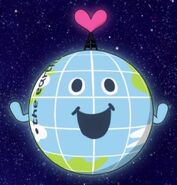 The Earth in the anime 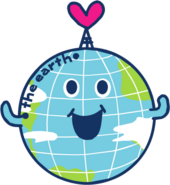 The Earth from the front.
Add a photo to this gallery
Retrieved from "https://tamagotchi.fandom.com/wiki/The_Earth?oldid=93718"
Community content is available under CC-BY-SA unless otherwise noted.