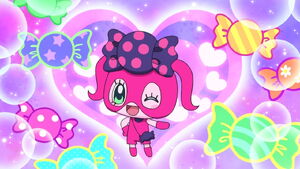 The Main Character Has Changed?! GOTCHIMAN (主役交代？！ＧＯＴＣＨＩＭＡＮ Shuyaku kōtai? ! GOTCHIMAN) is part two of episode 47 of GO-GO Tamagotchi!. Along with part one, it is episode 268 overall. It initially aired on the 5th of March, 2015.

Gotchiman discovers that there is a new spin-off series of his show starring "Smile Spark Candy Girl", or Candy Pakupaku. He learns that he will no longer be in the series, and goes into despair. He later hangs out with Oyajitchi, who soon mysteriously leaves him.

While pulling Oyajitchi's cart through town, Gotchiman notices that Candy Pakupaku in her Smile Spark Candy Girl outfit is hanging high above the ground on a rope. Gotchiman manages to rescue her from danger and afterwards, he is allowed to star on TV again. He also discovers that Oyajitchi will be a new villain.

Retrieved from "https://tamagotchi.fandom.com/wiki/The_Main_Character_Has_Changed%3F!_GOTCHIMAN?oldid=56853"
Community content is available under CC-BY-SA unless otherwise noted.