This article is about the modern character. You may be looking for the vintage character of the same name.

Togetchi (とげっち) is a male adult character that debuted on the Chou Jinsei Enjoi Tamagotchi Plus in Japan and on the Tamagotchi Connection Version 4 internationally.

Togetchi is mostly light blue, but the top of his head is yellow. He has many points all over his body, and two longer points on top of his head that resemble ears. He has pink cheeks, almond-shaped eyes, and a cat-like mouth. His arms and legs are short and stick-like.

Togetchi has a reputation as being aggressive, but he's actually very calm and peaceful, and he is a pacifist. His favorite phrase is "Love and Peace". However, he can be very fierce when he is angry.

Ura Togetchi is featured on Ura Jinsei Enjoi Tamagotchi Plus and the Tamagotchi Connection Version 4.5. He looks like Togetchi except for his multi-colored striped hat and his bat-like wings. He says he sings like a rocker but he actually sings like a country singer.

Togetchi is a male adult in the Meme Family. He evolves from either Hinotamatchi or Gourmetchi.

Togetchi is the male artistic adult for the Meme group. He can evolve from either Hinotamatchi or Gourmetchi. His favorite food is tacos. He goes to sleep at 10:00 and wakes up at 9:00.

Togetchi appears on even generations as an above-average care character. His favorite music genre is rock and roll, and his favorite instrument is drums.

Togetchi is one of the students in Grippatchi's class. He is usually seen singing with his bandmates, Hinotamatchi and Tosakatchi.

Togetchi is a student at Tamagotchi School. He is a big fan of Lovelin, and he performs songs with Hinotamatchi. 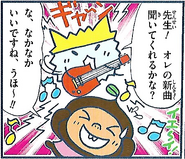 Togetchi in the opening song of Tamagotchi! 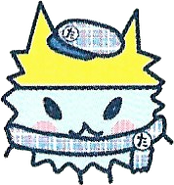 Togetchi wearing a school uniform
Add a photo to this gallery
Retrieved from "https://tamagotchi.fandom.com/wiki/Togetchi?oldid=98459"
Community content is available under CC-BY-SA unless otherwise noted.