Tropicatchi (トロピカっち Toropikatchi) is a female character who debuted in episode seven of the Tamagotchi! Yume Kira Dream anime. Her first virtual pet appearance was on the worldwide Tamagotchi Friends release.

Tropicatchi somewhat resembles a tropical plant or a pineapple. She has gold skin and green, grassy hair with a pink hibiscus flower. She has two circular, yellow earrings on each side of her head. She wears a red dress with white sparkles and a fluffy white collar. Her feet are usually not visible, except sometimes when she dances.

Tropicatchi is usually shy, and it can take her a while to speak up. However, she has a lot of perseverance, and she learns quickly. She is often quiet, but she can cause mischief when she gets too passionate. She is quite romantic. She also loves rain and hates umbrellas.

Tropicatchi evolves from any female teen with poor care (Nokobotchi with 5 or more Care Mistakes, Painaputchi with 4 or more, or Neotchi with 7 or more) and trained with a Gourmet personality. If no personality is trained, Tropicatchi has roughly 33% chance of appearing.

Tropicatchi is a student in the hairdressing class at Dream School.

In episode 7 of Tamagotchi! Yume Kira Dream, she falls in love with a peacock called Kujack Jack. She becomes a very impressive dancer after Yumemitchi and Kiraritchi teach her how to dance to help her impress Jack.

Tropicatchi is a member of the Pretty Princesses band. She play as the drums on the Smapi.

In GO-GO Tamagotchi! episode 30, she and Kujack Jack are crowned Pumpkin King and Queen, and share a dance together.

Tropicatchi trying to get Kujack Jack's attention with a costume 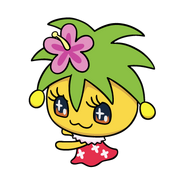 Add a photo to this gallery
Retrieved from "https://tamagotchi.fandom.com/wiki/Tropicatchi?oldid=97216"
Community content is available under CC-BY-SA unless otherwise noted.