Tsukitchi (つきっち) is the moon of Tamagotchi Planet. He can be seen in the night sky.

Tsukitchi resembles a yellow crescent moon with a face. He has beady eyes and a pink beak. Sometimes he makes different face expressions, such as sadness, depending on what's going on back on Tamagotchi Planet. He is different from a real moon because he never goes through different phases, instead, he always resembles a crescrent.

Tsukitchi has appeared in Tamagotchi: The Movie, Let's Go! Tamagotchi, and every entry in the Tamagotchi! series. He is usually a silent background character. Sometimes he talks (although rarely), and acts as a narrator for the show.

In the Tamagotchi! anime, he is voiced by Tokuyoshi Kawashima.

He has a different appearance in the vampire episodes of Tamagotchi!, broadcasted by TAMAX-TV. The blanked out side of Tsukitchi is shown to be his frankenstein looking side.

Tsuki is Japanese for "moon".

Tsukitchi in Tamagotchi: The Movie 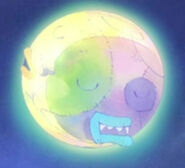 Tsukitchi in Sorette, Kuchipatchi.
Add a photo to this gallery
Retrieved from "https://tamagotchi.fandom.com/wiki/Tsukitchi?oldid=85568"
Community content is available under CC-BY-SA unless otherwise noted.