The Twistetchi (ツイステっち) is a licensed Tamagotchi Nano model based on Twisted Wonderland, a Japanese battle/rhythm mobile game co-developed by The Walt Disney Company and the Sony Music Japan-owned Aniplex, that prominently features several antagonists from the former's films.

The Twistetchi uses the same mold and ball chain style first introduced with the Evatchi. In addition, each shell comes bundled with a die-cast silver-colored charm. Unique to the Twistetchi is the packaging; it is a black box with a golden crest on the front.

Disney: Twisted-Wonderland is a Japanese mobile game created by Aniplex and Walt Disney Japan. The game takes place at Night Ravens College, a magical boarding school with seven dormitories themed after the villains of classic Disney animated films. In the game, the player is accidentally transported to the school through a magic mirror, and is allowed to be enrolled as a student until they can find a way to return home.

In the story developed for the Twistetchi, the player is magically transported to Night Ravens College, but there is no one around to supervise them in training for magic. The Headmaster Dire Crowley assigns the black cat Grim to the user, and the user must prove themselves before they can meet the other students of the school and be sorted into one of the seven dormitories.

After setting the clock, the user will begin their training alongside the black cat Grim. After 24 hours, how well the user has performed in caring for Grim and performing the lessons will determine which of the seven dorms Dire Crowley will sort the user into, as well as which of the 22 possible students the user will train with. While the on-screen character changes, Grim will still be present to be fed and cleaned up after.

There are no on-screen icons, and therefore all information is conveyed through the screen and buttons. Grim is cared for by filling his meters; he has Hungry and Happy meters, each consisting of four units, which are both empty when he's born. The Hungry meter decreases by one unit per hour, and the Happy meter decreases by one every 50 minutes. If either becomes empty, Grim or the student call for attention to fill them.

Pressing the A button opens the main menu, with the first option for the food menu, and the second option for the lessons. The meal option (canned tuna) fills one Hungry unit, and Grim will refuse to eat anymore once the meter is full. The snack (macarons) fills one Happy unit, and can be fed even when the Happy meter is full. The A button is also used to open the lights on and off menu when the character has fallen asleep. Both Grim and the students sleep at 10 PM. They both wake at 7 AM, and will turn the lights on themselves when they wake up.

Various characters from Twisted Wonderland will appear, showing the various activities happening within the school. Different days of the week may show different animations and certain events may also appear at different times.

After 3-5 days the user's character be sorted into their respective house and change into their dorm uniform. Animations for each dorm are different.

Occasionally, Grim will feel irritated and mischievous and start spreading fire on the screen, indicated by a fire appearing next to him or one of the students. Pressing the A button will soothe Grim and remove the fire, making him happy again. If left for a long time, multiple flames may gradually appear, with 8 flames completely filling the screen. The user will not be able to feed Grim or perform the lessons until the flames are removed.

If calls to feed and study are ignored for too long, or if fire is allowed to fill the screen, the character will become discouraged, indicated by a crying animation next to sulking lines. Pressing the A button twice will comfort the character and regain their trust. As with the fire, the user will not be able to feed Grim or perform the lessons until trust is regained.

If the character is allowed to sulk for a prolonged period of time, the Headmaster will remove the user from the school, indicated by a screen of the school crest with its colors inverted. Pressing the A and C buttons together will start the cycle over. 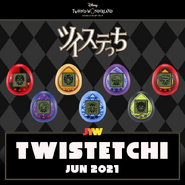 Promo image of all the shells 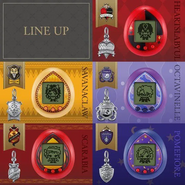 Line up of the shell types 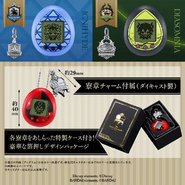 Line up of shell types and packaging 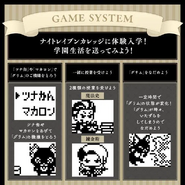 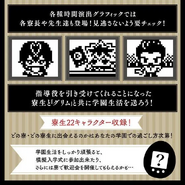 More features of the Twistetchi

The seven different charms bundled with the shells.

The front of the each box.