This article is about the object. For the character, see UFOtchi.

A UFO ("Unidentified Flying Object") is a type of vehicle used by Tamagotchis to travel to and from the Tamagotchi Planet. Their size and appearance varies, and they appear infrequently on the virtual pets.

As part of Tamagotchi's origin story, when the Tamagotchi Planet got drunk and began to sing, the Tamagotchis fled from their Planet in UFOs. One UFO crashed to The Earth in the Sumida River, where Professor Banzo and his assistant, Mikachu, found it. The UFO was damaged and the Tamagotchis inside could not survive in Earth's atmosphere, leading to the development of the Tamagotchi toy.

On English editions, a UFO appears as a Death screen on the second generation of the original Tamagotchi.

The UFO acts as the Egg on the American version, replacing Obaketchi. After five minutes, a Ghost Jr descends from it.

The UFO appears as the Death screen on the Yasashii Tamagotch, though instead of dying, the Tamagotchi departs back to the Tamagotchi Planet. When visiting the Album, the UFO will be seen next to the departed Tamagotchi.

On the Deai Hakken!! Arukotch, a UFO will appear at night if Arukotchi has befriended Zatchi. If the two manage to go on a date, Zatchi takes Arukotchi on a ride inside a UFO.

The UFO is an item that can be obtained on the Tamagotchi Connection Version 2, Version 3, Version 4, and Version 4.5. The Tamagotchi will ride the UFO to a random location, ranging from places on The Earth to fantasy worlds.

The UFO appears as an item on the Chou Jinsei Enjoi Tamagotchi Plus and Ura Jinsei Enjoy Tamagotchi Plus as the most expensive item on both versions. While normally travel tickets are required to visit special locations on E-Tamago, the UFO allows the Tamagotchi to visit any location, including Oyaji Village.

A large UFO appears as the death screen on English editions of the Tamagotchi Connection Version 5 and Version 5 Celebrity.

On the Tamagotchi Music Star, the UFO costs 2 million Gotchi Points, or can be obtained randomly through the Tama Battery. Like the earlier version, it carries the user's Tamagotchi to a random location.

On the Tamawalkie, a UFO crashes and the player's Tamagotchi must travel the Earth and collect the parts needed to repair it, while collecting items for the Tama & Earth EXPO.

During the opening sequence of the Tamagotchi CD-ROM, a UFO piloted by Maskutchi and Zuccitchi nearly crashes into the Earth after the two pilots get into an argument. The ship then drops an egg down for the user to raise. The ship returns to collect the Tamagotchi later on as the game's death screen.

In Tamagotchi Video Adventures, a UFO is sent to the Earth with several Tamagotchis to explore the planet and collect artifacts. It lands in a cornfield, where it remains until the end of the video.

In the opening sequence of Tamagotchi Corner Shop 3, a UFO arrives on Earth to take the player to Tamagotchi Planet. Inside the UFO, the player will meet the Mayor and one of three characters: Mametchi, Memetchi, or Kuchipatchi.

The loading screen for the V3, V4, and V4.5 Tamatown websites shows a UFO traveling from Earth to Tamagotchi Planet. 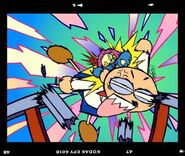 The UFO colliding with Banzo in Tamagotchi Honto no Hanashi 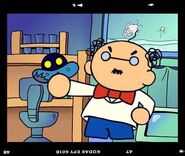 A second UFO seen in the Nintendo 64 game

The second UFO colliding with Banzo

A UFO traveling from Earth to Tamagotchi Planet, as seen in the Tamatown loading screen.

UFO in the anime

Add a photo to this gallery
Retrieved from "https://tamagotchi.fandom.com/wiki/UFO?oldid=100079"
Community content is available under CC-BY-SA unless otherwise noted.