Uwasatchi (うわさっち) is a female Tamagotchi character. She debuted as a raisable character on the Japanese Tamagotchi iD, and the Tama-Go internationally. She also appears in Mametchi's class in the Tamagotchi! anime.

Her voice actress is Mizuta Wasabi.

Uwasatchi has cream skin, orange cheek spots, and freckles. She wears an orange dress, green stockings, and a large green hat with yellow flowers on it. Each of her eyes have two eyelashes, and in the anime her irises are depicted as purple.

Uwasatchi is often said to be selfish and moody. She's always desperate to spread the latest gossip. This can hurt her friends' feelings, but she is not aware of this. She hates being told that she is attempting to make up a false rumor. She is sneaky, suspicious and distrusting, but gets flustered when she is called cute or is seen being girly. Sometimes she has trouble seeing the truth, such as when she didn't believe Lovelitchi was Lovelin, and when she mistook Kuromametchi for Lovelin.

According to her profile in episode 95 of the anime, her "type" (for love interests) is Tamagotchis who are tight-lipped and good at keeping secrets, which is a stark contrast to her own personality.

In the first season, she wants to find out more about the big secret involving Lovelitchi and Lovelin. When Lovelitchi tells everyone that she is Lovelin, Uwasatchi does not believe in her and thinks it might be just a joke or a made-up gossip. Uwasatchi never believed Lovelitchi until she proved that she is Lovelin by being in the TV show (as Lovelin) with her.

In episode 79, she becomes suspicious of Spacytchi and tries to get Nachuratchi to take photos as evidence. However, Nachuratchi keeps getting distracted and this deeply annoys Uwasatchi. When Uwasatchi tells the Tama-Friends that Spacytchi wants to conquer Tamagotchi Planet, nobody believes her, making Uwasatchi one of the only characters who knows of Spacytchi's secret.

Uwasatchi loves the colors orange and green (That is why she wears an orange dress and a green hat), but dislikes pink. Her mother is Safetytchi, who is equally nosy and gossipy.

Uwasatchi evolves from Chuchutchi, who is the worst care teen. To get Uwasatchi, Chuchutchi must be treated the same way as she was as a child - garnering four or more care mistakes.

Uwasatchi is obtained when a female teen receives a small amount of neglect.

"Uwasa" is Japanese for "gossip."

Uwasatchi as a Halloween costume 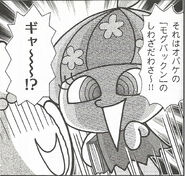 Add a photo to this gallery
Retrieved from "https://tamagotchi.fandom.com/wiki/Uwasatchi?oldid=95212"
Community content is available under CC-BY-SA unless otherwise noted.