Watawatatchi's name comes from wata, the Japanese word for cotton.

Watawatatchi has light yellow skin, pink cheeks, and small dark eyes. She wears a white cotton dress and doesn't have visible legs. Her Tama Pet sits on her head, which is white and fluffy with small dark eyes and a yellow beak, as well as two long arms which look like they are Watawatachi's ears.

Watawatatchi is a shy, caring Tamagotchi. She loves relaxing and fluffy things. She gets easily nervous while talking to other Tamagotchis, and blushes a lot. However, she is very sociable when talking to animals. She has the power to talk to Tamagotchi animals and Tama Pets, such as Doremitchi who can only say Kyu (きゅ). She is often seen talking to forest animals like birds.

The Tama Pet on her head can only say wata wata (わたわた), an onomatopoeia (sound) word, and sometimes speaks while waving its arms after Watawatatchi finishes speaking. It sometimes matches her expressions as well.

Watawatatchi can hover in the air for short periods of time when her Tama Pet flaps its arms.

During the first generation, Watawatatchi evolves from any female teen with 7 or more care mistakes. In other generations, her genes will appear from said parameters being met by female My Tamas, even without Watawatatchi parentage. She has thus become a neglect-exclusive character in this game, much like Gozarutchi, her male care-counterpart. 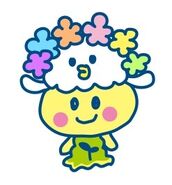 Watawatatchi on the iD L
Add a photo to this gallery 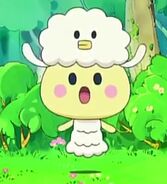 Retrieved from "https://tamagotchi.fandom.com/wiki/Watawatatchi?oldid=101200"
Community content is available under CC-BY-SA unless otherwise noted.