In the anime, she is voiced by Kumi Domon.

Watchlin looks like a digital watch (without the wrist strap). She is pink with catlike ears and a lighter pink face. She has three purple buttons and some white sparkles on her tummy, as well as a blue button on one of her ears. The middle purple button is shaped like a heart. She has a curl on her face / screen that looks like hair and changes to different shapes depending on her mood.

Watchlin can shrink to the size of a watch and attach herself to someone's arm by ejecting a purple wriststrap. Then, she can do a "lucky check" to find out what someone's lucky color is, similar to one of the functions on the Himespe Phone. When Watchlin performed a Lucky Check for Smartotchi, she instead commented on how "handsome" he was.

She adds the word "tick tock" (チクタク chiku taku) to the end of every conversation.

Watchlin sending herself and the others back in time 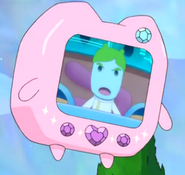 As Melodytchi (Season4 Episode 41)
Add a photo to this gallery

Retrieved from "https://tamagotchi.fandom.com/wiki/Watchlin?oldid=102051"
Community content is available under CC-BY-SA unless otherwise noted.