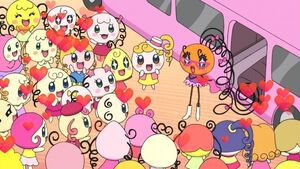 Which Future? Memetchi's Determination (未来はどっち?めめっちの決意 Mirai wa dotchi? Memetchi no ketsui) is part two of episode 46 of GO-GO Tamagotchi!. Along with part one, it is episode 267 overall. It initially aired on the 26th of February, 2015.

Mametchi creates an invention which he says has the ability to allow the user to see into their future. Memetchi volunteers to test out the device, thus seeing potential outcomes of her future.

Retrieved from "https://tamagotchi.fandom.com/wiki/Which_Future%3F_Memetchi%27s_Determination?oldid=86361"
Community content is available under CC-BY-SA unless otherwise noted.