The Yasashii Tamagotch (やさしいたまごっち meaning Easy Tamagotchi or Simple Tamagotchi) is a Deka Tamagotchi released in September 1998. It is one of the rarer Tamagotchi virtual pets, as it debuted near the end of the first era of Tamagotchi pets.

The Yasashii Tamagotchis, also known as "YasaTamagotchis", are Tamagotchis that were born and raised on Earth. Thus, they only know about Tamagotchi Planet based on stories from older Tamagotchis who had lived there. The YasaTamagotchis are excited to return to their home planet for the first time.

The Yasashii measures approximately 10 centimeters (4 inches) tall, making it roughly the size of the Home Deka Tamagotchi and the biggest virtual pet in the Tamagotchi franchise. The right side of the shell has a volume control switch, and the back has a stand that can be positioned to stand the Yasashii upright. The Yasashii features six large back-lit buttons to perform actions to care for the Tamagotchi, and two smaller buttons near the bottom for Select and Cancel functions. The Reset button is also on the front of the shell, slightly to the bottom left of the Meal button.

The Yasashii functions are identical to that of a standard Tamagotchi, except all of the options are now featured as their own buttons on the unit. Instead of scrolling through icons, the user simply presses the function they want to use. The six buttons are "Meal", "Happy", "Care", "Toilet", "Lights", and "Check Meter". Beneath the buttons are the "Select" and "Cancel" buttons; these are used for selecting different options or cancelling an option, respectively.

When one of the six care buttons are pressed, it will light up, and none of the other care buttons can be pressed until the action is done. When the Tamagotchi calls for attention, the icon that needs to be satisfied will flash.

This button will feed the Tamagotchi 1 meal, filling 1 Hungry heart and increasing the weight by 1g. If the Tamagotchi is not full after eating, they may do a "begging" animation.

There are two options. One is to feed the Tamagotchi a snack, and the other is to play the game. The snack will fill one Happy heart, and increase the weight by 2g. If the user feeds the Tamagotchi too many snacks, it may do an "exercising" animation, though they will not lose weight doing so.

The game is a matching game with four boxes. The Tamagotchi will open the top left box and show one snack, and the user must press one of three corresponding buttons (which blink repeatedly) to open another box. The player earns a point if the food in their box matches the Tamagotchi's. The game has five rounds, and the player much successfully match at least 3 times to win.

This button will clean up any poo the Tamagotchi leaves behind. Older Tamagotchis will flash the icon before they poo; pressing it quickly will make the Tamagotchi use the toilet instead.

This button turns the lights on and off for when the Tamagotchi falls asleep.

In order, this button will show the Tamagotchi's age and weight, hunger, happiness, and discipline meter. When all of the Hungry and Happy meters are full, the Tamagotchi will sing for a short period.

Instead of dying, the Tamagotchi will depart from the user in a UFO. After starting a new Tamagotchi, the user can see an album of their previous Tamagotchis by going to the clock screen and pressing the "Select" button.

The Yasashii is one of the few vintage releases to feature the Tamagotchi engaging in activities throughout the day. Unlike the ones on most modern releases, most events can be triggered by the player's direct input. 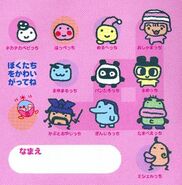 Official 1998 Artwork
Add a photo to this gallery
Retrieved from "https://tamagotchi.fandom.com/wiki/Yasashii_Tamagotch?oldid=99777"
Community content is available under CC-BY-SA unless otherwise noted.