Male:
Young Androtchi (やんぐろぼっち Yangu Robotchi) is a male teen character who debuted on the Chou Jinsei Enjoi Tamagotchi Plus in Japan and the Tamagotchi Connection Version 4 worldwide.

He resembles a much smaller version of Androtchi. His mouth is pink, his wheels are yellow, and his lower body is blue with stripes. Additionally, he doesn't have hands at the end of his arms and there isn't a light on the antennae of his head. His body and eyes are square-shaped.

He looks up to Androtchi and wants to be like him. He claims that his secret is that he's afraid of ghosts and the dark. He also loves anything technical or mechanical. When he is happy, the antennae on his head curls.

In Tamagotchi Connection: Corner Shop 3 , Young Dorotchi remarks that Young Androtchi likes to take apart machines, but sometimes he has trouble putting them back together.

Young Androtchi is a Mame Family teen that evolves from Mamebotchi with below average care. Depending on what skill points are accumulated, he can become either Mametchi (Intelligence), Androtchi (Fashion), or Zukyutchi (Kindness).

Young Androtchi is a male Mame teen that can evolve from Harutchi with average care or worse, or Puchitchi with any level of care. If he finishes the teen stage with a skill point total of 80 or higher and receives good care he may evolve into either Mametchi (intelligence), Androtchi (fashion), or Zukyutchi (kindness).

Young Androtchi is one of three possible teen characters to choose from on the male unit. He evolves into Mojamojatchi. 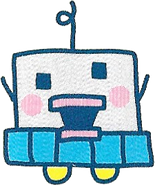 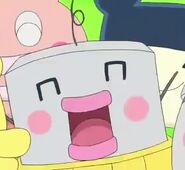 Young Androtchi in the anime, with a yellow lower body 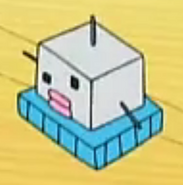 Add a photo to this gallery
Retrieved from "https://tamagotchi.fandom.com/wiki/Young_Androtchi?oldid=93876"
Community content is available under CC-BY-SA unless otherwise noted.