Female:
Young Dorotchi (やんぐどろっち Yangu Dorotchi) is a female teen Tamagotchi that debuted on the Chou Jinsei Enjoi Tamagotchi Plus in Japan and on the Tamagotchi Connection Version 4 internationally. She is a young counterpart to Dorotchi, but has recently been upgraded to an adult character.

Young Dorotchi looks like a ghost, similar to Dorotchi. She has a round white body with a little tail and two long droopy arms. She has blue oval-shaped eyes, pink cheeks, and Kuchipatchi-like lips. She wears a red bow on the top of her head.

Sincere, loves her red ribbon, and always says, "I wanna be a grown-up like Dorotchi!" She is afraid of "ghosts", or whatever she believes them to be. Even though she says she isn't one, she is.

Young Dorotchi is a Kuchi Group teen that evolves from Kuchipetchi with 0-3 care mistakes. Depending on her highest Skill Points, she may evolve into Pukatchi (Intellectual), Sebiretchi (Artistic), or Yattatchi (Social).

Young Dorotchi is a Kuchi Group teen that evolves from Mohitamatchi with 0-5 care mistakes, or Mizutamatchi with 4 or more care mistakes. She must also have been given good all-around care. Depending on her highest Skill Points, she may evolve into Pukatchi (Intellectual), Sebiretchi (Artistic), or Yattatchi (Social). If her Skill Points are low, she may evolve into Pyonkotchi. Low Skill points and a small amount of neglect may result in Hanatchi, while constant neglect may cause evolution to Masktchi regardless of Skill Points.

This article is a stub!

You can help the Tamagotchi Wikia by expanding it.

This article is a stub!

You can help the Tamagotchi Wikia by expanding it.

Young Dorotchi is a background character in the Tamagotchi! anime, where she is a student in Chamametchi's class. 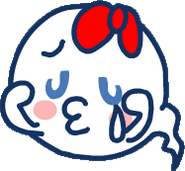 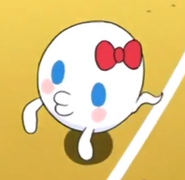 Young Dorotchi in Tamagotchi: Happiest Story in the Universe!

Young Dorotchi Junbi Gymnastics
Add a photo to this gallery
Retrieved from "https://tamagotchi.fandom.com/wiki/Young_Dorotchi?oldid=92376"
Community content is available under CC-BY-SA unless otherwise noted.