Dream Change Scanner Yume Kira Bag (ドリカワカードスキャン ゆめキラバッグ Dori Kawa Kādo Sukyan Yume Kira Baggu) or Yume Kira Bag (ゆめキラバッグ Yume Kira Baggu) for short; is Yumemitchi's and Kiraritchi's transformation bags. To which they use the bags to transform themselves into any occupation/job, such as idols. They open their bags and scan special cards (Dorikawa Cards) that change them into what they want.

After using the bag frequently, Yumecantchi is possibly created and always appears when Yumemitchi and Kiraritchi use their bags.

However the bags come with one consequence, one rule. If they do not fulfil and complete their dream (The reason why they transform), they will be stuck in the form they transformed forever until it is completed. Once compeleted, they dash off from sight, both girls start glowing white and their costumes, confidence, and part of their talent disappear. The bags then reappear in front of them and drop into their arms.

Yumemitchi named the bags after their first idol performance at the Dream Festival, which they won. However, when called back on stage, no one recognizes they are the idols from the performance. Now when anyone does not recognizes them, they just say they are "just passing by..." (通りすがりの～ tōrisugari no).

As with Yumecantchi, the true origin of the Yume Kira Bag is still unknown.

Yumemitchi and Kiraritchi received their bags from Uranaishi no obāsan, an old fortune telling woman from a moving circus. They first meet her at the circus, asking her about their fortune in being idols, their dream.

The next day both of them wanted to see the circus that was opening, in action today; however at the circus a few events happen involving Liontchi being startled and having a splinter in his toe. As Danchoutchi (Ringmaster) tries to calm him down and pull the splinter out, Liontchi is startled again and is about to attack Pierotchi. Yumemitchi and Kiraritchi distract Liontchi by singing and dancing, and Danchoutchi pulls the splinter out. Uranaishi no obasan is watching from out of sight and in return she gives the bags to the girls to fulfill their dreams.

Dorikawa cards are the main items used with the Yume Kira bag in the Tamagotchi! Yume Kira Dreams series. They are cards with scan-able codes built into them, and some when scanned can transform the user to have the same characteristics as the card states. There are other types of Dorikawa Cards, and some can be used as IDs as shown in the Tamagotchi anime. To use them you need to scan a place or dream card, then one or two accessory cards in order for the bag to work.

Yumemitchi and Kiraritchi mention the cards in Episode 1 of Yume Kira Dreams, they are seen looking at them in a magazine. They actually get their own set of cards from Uranaishi no obāsan, after receiving the Yume Kira Bags. It is unknown what effect this will have on the toy version of the bag, but in the anime; Yumemitchi and Kiraritchi swipe the cards in order to transform into different types of people, such as cheerleaders or idols.

The Yume Kira bag toy comes with five cards (accessories and places/dreams) these vary depending on the bag you buy, additional cards can be purchased with Dorikawa Charms.

The Yume Kira Bags have been made into toys that run similarly to the bags in the anime. On the inside they have a small screen and a slot for scanning real life Dorikawa Cards. The bags can connect to each other and can connect to a Tamagotchi P's, but only to transfer Gotchi Points. The bags were released in Japan on October, 2012.

A combination of two Dorikawa cards scanned in the Yume Kira Bag toy will unlock an item or a transformation.  The bags come in two colours, pink and blue, but the only difference is the cards that they come with. 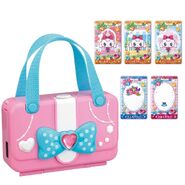 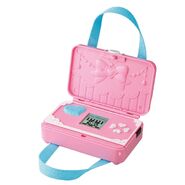 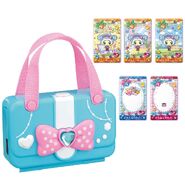 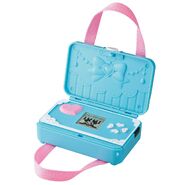 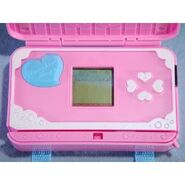 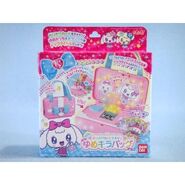 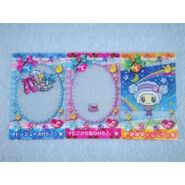 Cards that come with the Kiraritchi's Dorikawa Charm.
Add a photo to this gallery

Retrieved from "https://tamagotchi.fandom.com/wiki/Yume_Kira_Bag?oldid=100334"
Community content is available under CC-BY-SA unless otherwise noted.