Unclear gender:
Zuccitchi (ズキっち Zukitchi) is an adult character that debuted on the second generation of the original Tamagotchi.

While it is almost never seen without its cowl, in Japan, some art exists of it facing away with the cowl removed, revealing that it has hair identical to Oyajitchi. However, from the front, Zuccitchi is missing Oyajitchi's facial hair. The relation between the two is hinted at again in Anime TV de Hakken!! Tamagotchi, when an Oyajitchi appears briefly among a pile of Zuccitchi cowls. In a Found in the manga! Tamagotch comic, during a dream sequence, a Zuccitchi removes its cowl to reveal an Oyajitchi. If a cowl is removed against Zuccitchi's will, it can instantaneously spawn another one to replace it.

Zuccitchi dreams of becoming a champion of justice. As seen in both the 1997 anime shorts and Found in the manga! Tamagotch comics, Zuccitchi is very sly and sometimes secretive. He is also mischievous and can be untrustworthy, and dislikes having its cowl forcibly removed.

The Official Tamagotchi Pet Care Guide and Record Book states about Zuccitchi, "How come your pet loves cafe mocha (which explains why it's a bit on the hyperactive side)? Perhaps it wasn't disciplined enough as a toddler? And though Zukitchi looks comical, it can be mean. It also wants to be a superhero (too much caffeine?)."

The Nintendo Power guide to the Tamagotchi GameBoy game stated: "This four-legged Tamagotchi likes to pretend that it's the superhero Zukin ("masked man"), but it sometimes acts like a villain, too."

Zuccitchi has a habit of sleeping with its eyes partially open. This is best seen in its appearances in several video games such as Sega Saturn de Hakken!! Tamagotchi Park, where it will occasionally shut its eyes fully while blinking.

Like Maskutchi Zuccitchi is an average care adult obtained from Tongaritchi. Whether the Tongaritchi begins with 50% or 0% Discipline, it must not receive any more than 50% Discipline. Hungry and Happy hearts must be filled only once they're halfway empty. If it had any Discipline before evolution, it will have 0% Discipline upon evolving. Zuccitchi wakes at 11 AM, sleeps at 11 PM, and has a base weight of 30. It has a maximum lifespan of 15-16 days on the original release and 19-20 days on the rerelease.

Zuccitchi can evolve further into the secret character on all three versions - Sekitoritchi on the Japanese version 1, Charitchi on the version 2, and Zatchi on international editions. This can only be done if it evolved from a Tongaritchi that began with 0% Discipline, meaning it must have had 50% or less as Tonmarutchi. After evolving into Zuccitchi, it must be given good to perfect care, with no care mistakes. Once the proper conditions are met, it will evolve between the ages of 9 and 10.

In the opening video, Zuccitchi is shown piloting a UFO to Earth with Maskutchi. The two get into a fight over who should clean the ship's cabin, leaving nobody at the controls, sending the UFO falling to Earth. They stop the ship just in time, and leave an egg to explore the planet.

Zuccitchi's place on the growth chart was swapped with Pochitchi's - as a result, while it can still only evolve from Tongaritchi it must receive good care rather than average care and cannot evolve into Zatchi.

Zuccitchi appears on even generations as one of the worst care adults.

During the expedition to Earth, Zuccitchi is paired up with Kuchipatchi. The two of them visit a golf course, play a perfect game of golf together, and bring the golfing equipment back to the UFO. Previously, the two had been to the planet Velcro, where they obtained a sample of plant life.

In Zuccitchi's episode, Mimitchi, Takotchi and Hashizoutchi try to find out what Zuccitchi looks like without the cowl. However, they discover that only Zuccitchi can remove it; if anyone else attempts, a new one quickly fades into existence on its head.

In Pochitchi's episode, Zuccitchi and Kusatchi tease him for trying not to act like a dog, and eventually trick him into acting and playing around like one.

Zuccitchi's mask off, facing away

Zuccitchi in the vintage anime shorts 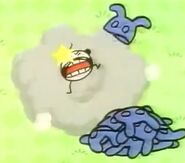 Oyajitchi among a pile of Zuccitchi's cowls
Add a photo to this gallery
Retrieved from "https://tamagotchi.fandom.com/wiki/Zuccitchi?oldid=100181"
Community content is available under CC-BY-SA unless otherwise noted.