Male:
Zukyutchi (ずきゅっち Zukyutchi) is a male adult Tamagotchi character that debuted on the Chou Jinsei Enjoi Tamagotchi Plus in Japan and the Tamagotchi Connection Version 4 internationally. His Ura counterpart is Ura Zukyutchi.

Zukyutchi has a white face with pink cheeks and red lips. His eyes are similar to Mametchi's, and in the anime, he has blue irises. The top of his head is dark blue, and he has two fluffy ears or hair on top of his head. His body is pink with a white chest and stomach.

Zukyutchi has a strong zeal for life and is very romantic. He has strong opinions as well. He is thought to be curious, as his heart beats faster when given the chance to find out something interesting. He is a crazy type who tends to get carried away. He is also usually excited most of the time, and tends to raise his voice often.

His catchphrase in Japanese media is "Zukyuuuuuuuun!", which he often says during highly emotional situations. English media depicting him, however, has him say different things related to the current situation that he's in, such as "Go!" in The Secret of Tamagotchi Town.

Zukyutchi is a male adult in the Mame Family. He evolves from Young Mametchi or Young Androtchi when the Style skill points are the highest.

Zukyutchi is a male adult in the Mame Family. He evolves from Young Mametchi or Young Androtchi when the Social skill points are the highest. His favorite food is pizza, but he dislikes noodles. He goes to sleep at 10 PM and wakes up at 9 AM.

Zukyutchi appears as a minor character in the first two Tamagotchi movies, Let's Go! Tamagotchi, Tamagotchi!, and GO-GO Tamagotchi!. He is a student at Tamagotchi School.

In Let's Go! Tamagotchi, he is a student in Ms. Perfect's class. He does not attend the class in any of the movies or anime. He is also a member of Mametchi's team in Team Battle! Mametchi VS Kuromametchi. While in other challenges, where he is either trying to help out or just simply participating with the other members, he has a role in one of the challenges, which involves him racing against Mametchi.

It is suggested he may be friends with ShimaShimatchi, Yattatchi, and Kuchipatchi as during a game of basketball, he manages to shoot the ball into the hoop on his first try, with Kuchipatchi complimenting him in the English dub. However, in the case of Yattatchi, he can be seen with her and ShimaShimatchi during one of his dreams in The Secret of Tamagotchi Town.

Zukyutchi's name comes from zukyun (ズキューン), which is a Japanese sound effect for a heart-throbbing sensation, such as when someone is falling in love. Interestingly enough, Zukyutchi says this as his catchphrase during these types of sensations. 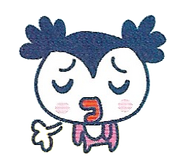 Zukyutchi in a parade, from Tamagotchi: The Movie 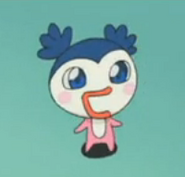 Zukyutchi telling a rumor to someone in The Power of Gossip!

Retrieved from "https://tamagotchi.fandom.com/wiki/Zukyutchi?oldid=96308"
Community content is available under CC-BY-SA unless otherwise noted.